Giving Back on #GivingTuesday

Had enough of Black Friday and Cyber Monday?

We have! Giving Tuesday is more up our street.

Giving Tuesday. is the time to give back. It was created in 2014 to remind people that there is more to life than spending money on stuff they don't need, to step back and realize that life isn't all about consumerism and commercialization. Life is about giving to those in need, be it animals or people. It's your choice. Give back to where your heart is telling you to do so, even a tiny amount is something to a charity. 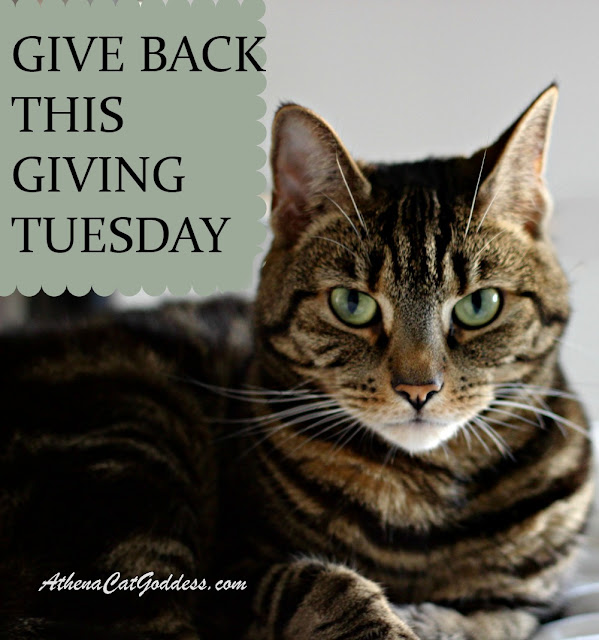 Yesterday and today, even though Mum isn't in the position to give to charity as much as she would like, she decided to donate to two cat charities because her heart told her to do so. These cats are in desperate need and the amazing animal angels helping them need all the donations they can get to enable them to take care of these poor animals.

Mum can't bear to see how these cats are treated, and how hungry they are. It's a horrible life for any soul to endure. And she hates how cats are often considered vermin in some countries. People would prefer to ignore them, or even worse, kill them.

Unlike in the UK and US, animal welfare isn't a priority in these countries.

But these cats can't help being born, can they?

Cats With No Hope

We've been following Cats With No Hope on Twitter for a while now. This is a cause to feed, vet and sterilize cats in Africa.

Tammy, who is from the US, is currently in North Africa trying "To help solve the problem of the enormously overpopulated stray feral cats."

She is taking care of up to  60+ feral cats and kittens in horrible conditions and has to feed them daily. "These are homeless cats living in abandoned buildings and on the streets. They have no one and are surviving on eating garbage. Many are hurt and sick. They show signs of many scars and years of damage. They look tired and worn from this life they have been given."

You can donate via the Cats With No Hope Go Fund Me page.

The Skiathos Cat Welfare Association is a small Greek Registered Charity, formed by Sharon Hewing in 2007. The charity became a registered charity in 2011, but even so, it relies totally on donations via their website, as well as Facebook and from tourists and other fundraising events.

"The purpose of our Association shall be to :

I've given a few contributions today, but it's hard because I want to give to every rescue that helps cats around the world!

What amazing organizations! I'm going to find out more. Thanks!

I wish I could afford to donate to these amazing places. XO

These are awesome groups! My human wishes she could donate more.

It's good to have days like this to be aware of what's going on in the world. We always try to give what we can, not only on these special days, but also to people that we know who could use a little extra. Thank you for coming to my Pawty, Athena and Mary. Hope you had a great time, just like me :D Extra Pawkisses for a Happy Day🐾😽💞

Giving Tuesday is such a wonderful day. Just a little bit of help to these charities is just so wonderful for helping out others. Thanks for sharing these awesome organizations with us. Have a wonderful day and we are going to order your calendar really soon.
World of Animals

wonderful causes!! We gave to the animals and humans in California last week

Awesome choices for your Giving Tuesday donations, Athena and Mum.