Mum always calls me her "little tiger" and she loves all cats, big and small, so when we were approached by Whiskas.co.uk to help in their “Help Protect A Tiger”campaign how could we refuse?

Today is the first Tiger Tuesday of the campaign, in which each week Whiskas and the WWF shine a light on one of the endangered tiger subspecies to help raise awareness around the plight of tigers in the wild.

So today on this first Tiger Tuesday we are showing our support for the endangered Sumatran tiger. 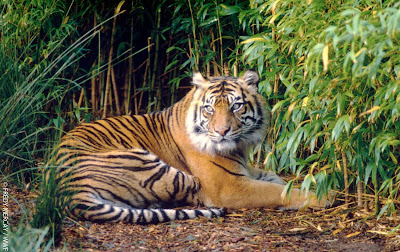 With less than 400 individuals holding on for survival in the few remaining patches of forests on the island of Sumatra, they are still under immediate threat from poaching and habitat loss.

At least 66 Sumatran tigers – one seventh of the surviving population – were killed in one year between 1998 and 1999. (Source: Nowell (2000) Far from a Cure: The Tiger Trade Revisited TRAFFIC)

The new Whiskas “Help Protect A Tiger” TV advert features two Sumatran tiger cubs, called Argo and Dhjala. They were born in February this year and were 2 and a half months old when the advert was filmed.

You can view the Whiskas “Help Protect A Tiger” TV advert here:

Argo and Dhjala currently live at Champrépus Zoo in France with their mother, Chandra, and you can read more about them on the zoo website:

Other ways you can help:

Purchase a special Help Protect A Tiger pack of Whiskas

New packs supporting WWF are now in stores across the UK! Each pack purchased will help to raise £500,000 for WWF's Tigers Alive initiative, which aims to double the number of tigers in the wild by 2022 - the next Chinese Year of the Tiger.

If you buy any of these packs for your cat, be sure to share a photo with the #ProtectATiger hashtag.

Become a Catservationist
Visit www.whiskas.co.uk/WWF/Catservation and upload your cat's photo to one of the 11 tiger territory maps. For every cat photo that is added, Whiskas will donate £1 to WWF's Tiger's Alive Initiative. Don't forget to share your picture once it's uploaded to help spread the word and encourage lots of other kitties to join the Catservation cause!

Text to Donate
You can donate £1 to WWF simply by texting TIGER to 70123. More information is here: http://bit.ly/TextWWF

Adopt A Wild Tiger
For a small monthly donation you can adopt Kamrita, one of 120 Bengal tigers left in Nepal.
https://support.wwf.org.uk/whiskas-tiger/?pc=ANC003001

So, come on my furry pals and your lovely humans, let's join together to help our big cousins!

Disclaimer:
Mum and I are in no way affiliated with the companies mentioned in this post.

Great post! I love tigers, and poachers just make me sick. I just don't understand how they could kill such beautiful creatures.

What a great post. Mom plans to share this info with lots of friends who are not bloggers. All of us as well as our angels at the RB adopted a big cat. We need to save all cats, big as well as small. Purrs and hugs, Lily Olivia, Misty May, Mauricio, Giulietta, Fiona, Astrid, Lisbeth and Calista Jo