Mum is still lagging behind on blogging duties as she isn't feeling too good at the moment. She is, however, trying to keep up with those of our great blogging friends via Twitter and Instagram. Sometimes she'll venture onto Facebook but not much.

We do hope that any of you caught in the Polar Vortex are doing OK and are safe and well. Hard to imagine what it must feel like to have to endure such extreme temperatures.

Last night in our neck of the woods it was -4 degrees Celsius and that was freezing enough, but nothing compared to what some of you are going through. It's worrying for the animals too as some idiots are still allowing their animals outdoors in such horrendous conditions. And what about the poor strays and wildlife?

As I edit this it is Friday morning and last night we had a little snow but nothing really to get excited about.

So, here's my art for today. Mum used PicsArt app, the effect is called White Ice.

Mum then added a sketchy frame from PicMonkey. 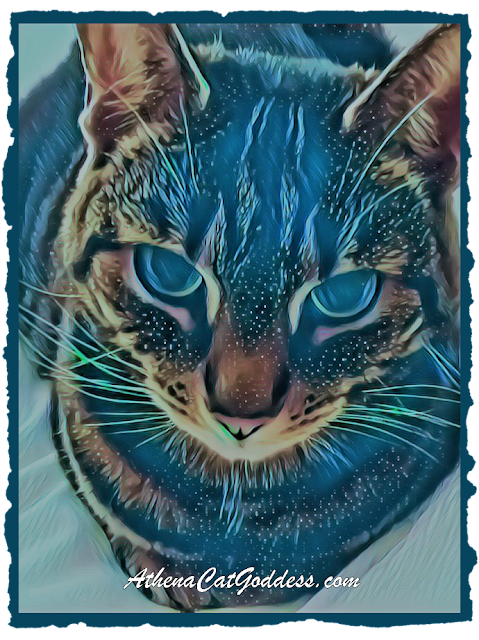 Oh, I hope your mum starts feeling better. She needs to take care of herself.

Hi Athena and Mum! Marv let me make art this week! I am really happy! I think I did a great job. And Athena, my Granny (Marv's Mom) has not been too great this week. I hope that your Mum feels better. We are much warmer here in Vancouver than the rest of North America, but even us are suposed to get some cold this weekend. They are saying it could get as cold as -6 c!!!
Anyway, Granny says I am more of a chatterbox than Marv...And I should tell you how much I LOVE your art!
Ninja

I hope your mum soon feels better, Athena.
We only had a smattering of snow on Thursday night too which is now solid ice. I will be glad when the warmer weather comes back!
Your art is lovely and shows how cold it is.

We hope your Mom starts feeling better we loved your picture but you looked a bit COLD.

Happy Caturday Athena and mum, it's been super fresh here too and the P.A. is feeling a lot like your mum -UGGGHHHHH- but lovely art today, really like that effect, furry cool, pardon the pun! XOX

Your artwork is always so beautiful, Athena, we especially love the blue color in it💙
Hope your mom is feeling better soon. Maybe a Healing Pawkiss will help😺
Happy Pawkisses for a wonderful weekend to the both of you🐾😽💞

OMC, you do look blue, O Wise One. It is Our Human's favourite colour, but We do hope that is not indicative of your mood - or that you are feeling the cold! We hope you are warm, and safe and feeling happy. Mummy checks the Accuweather app on her meowbile phone effurry day to see what the weather is like in England, because her brother lives there - and She saw you had snow there. Still, it's not as bad as it is in the Mewnited States, is it?
We wish your Mum better - and send pawpats and kitty kissies to you both.

This is a great effect. It made your photo look very wintery. We are so sorry about your mum continuing to feel unwell. Our mom has been a mess since falling down the stairs. We will keep your mum in our prayers if you'll do the same for ours. Thanks for having this blog hop. We love it. XOCK, angel Lily Olivia, Mauricio, Misty May, Giulietta, angel Fiona, Astrid, Lisbeth, Calista Jo, Cooper Murphy and Sawyer

We love your artwork! We hope your Mum feels better soon.

Our worry is the animals in this cold too :( It's heartbreaking.

Uh oh, I posted the wrong picture. The cat photo is the last one on my post.