Music always evokes memories for you humans (and for us kitties too). It becomes the soundtrack of our lives. So, a while back I had an idea for a new regular feature on this blog.

For Throwback Thursday, why not do a post about your favourite song (or songs) that conjures up memories from your past? Or it can be a favourite album that takes you right back.Then you write a short piece about that particular time (if you want to). And if you wish, how about linking to us when you post? (Actually, it would be greatly appreciated if you could!) 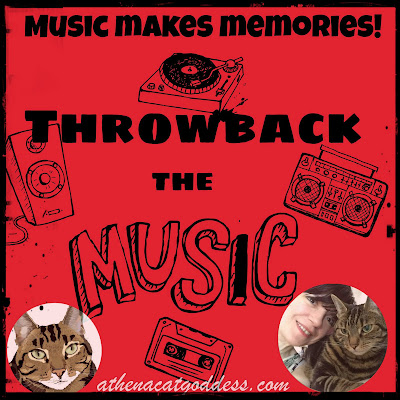 On this day, 20 years ago, Princess Diana tragically died in a car crash in Paris so Mum wanted to write a post in honour of this remarkable lady.

Mum says she isn't a supporter of the monarchy, but she did like and admire Diana because she was different and was so in touch with the common people and wasn't afraid to show her emotions. It's just really sad that the princess was only 36 when her life ended. So incredibly sad that she never got the chance to see her beloved boys grow up. William and Harry had a wonderful mother and she would have been the most amazing grandmother.

On the night Diana died, Mum was with her other soulmate kitty Suzy at her flat (apartment). Suzy actually still lived at home with Mum's mother and brother, but that weekend she was staying with Mum because Granny was having some work carried out at the house.

At the time, Mum was living the life of a vampire, sleeping all day and staying awake all night, (though please note, she wasn't actually a vampire and she never lusted after blood!)

Just after midnight, the movie mum was watching on TV was interrupted by a news flash that the princess had been involved in a car accident.

Mum's first thought was how unlucky Diana was as over the past few months the princess seemed (according to the press) to have found happiness at last. Mum hoped Diana would be alright and the injuries she'd sustained weren't going to be serious.

A few hours later the dreadful news that Diana had passed away was to shock the whole world.

A week later Mum actually joined millions of others at the funeral in London. I'll let her tell you about it below.

" I wasn't going to attend the funeral but a friend at the time wanted to go so I went and, looking back, I'm glad I did. As I'm a bit of a history buff, I feel honoured to have been a part of history.

Even now, 20 years on, I can still remember the surreal quietness and stillness of it all. It was a crisp early autumn day, slightly misty morning and my late dad drove us there early as he used to work in London. After we had breakfast at a cafe he dropped us off at Hyde Park. We made our way along the Serpentine towards Kensington Palace and then Kensington High Street and found a space to stand in the crowd and wait for the procession.

At just after 9am the funeral procession began and we waited in stunned silence for the cortege to pass. I heard the horses' hooves clicking on the ground in the distance. Cries of "Diana" from a few grieving women pierced the eerie silence.

The clicking of hooves got nearer and nearer and I was lucky to be at the front of the crowd and could see it all so clear. I immediately caught sight of the flowers with the "Mummy" card on it. It was heart wrenching. At this point, as it was at the beginning of the almost 2 hours procession from Kensington Palace to Westminster Abbey, there were no royals walking along behind the coffin. They would join the cortege later, so I didn't get to see the two young princes. Not that I wanted to. I think it was unfair that they had to endure the torture of walking behind their mother's coffin, with the eyes of the crowd and the world watching. I don't know how they did it. I wouldn't have been able to. But I'm not here to judge. They were very brave.

After the cortege went past, we started walking and made our way to Hyde Park and found a space on the ground to sit and watch the live broadcast of the funeral on two giant screens.

We watched the entire funeral there, and though I felt immense sadness I couldn't cry, though others around me did. When Diana's brother Earl Spencer had said those words about the royals and everyone around me rose to their feet and clapped, I did too. I'm glad I was part of that.

It's a moment in time that will live on in my memory forever, something to tell my kids and grandkids (though I don't see myself having any), but I'm happy to share with my furkid instead!"


Where were you when you heard that Princess Diana had died?

What an incredible experience to have attended her her funeral. I can't believe it's been 20 years. I remember exactly where I was when I heard the news. I was a teenager attending a music festival in Seattle. EVERYONE was talking about it. Such an incredible tragedy.

Diana's work with victims of hidden mines and explosives was awe-inspiring.

My human remembers those days very well. It was a sad time in southern California, even though it was so far away.

I love this idea for a blog hop! I wrote about my memories of that tragic day too. That is so amazing that you attended the funeral.

I remember my husband and I were in the car coming home from a restaurant when we heard that she had been gravely injured. What an honor to have attended her funeral.

Diana was a remarkable lady who brought attention and change to many worthy causes.

The whole thing still makes me angry. Diana had such courage - such heart - such determination to never give up. At the time, I'd not gone back to college because my anorexia/depression was so bad. I'd just set up a tiny TV in my bedroom at home and I stayed glued to that from the moment I first heard - to way past the news that she'd died. I usually don't get excited about famous people - but she was the exception. For weeks, I immersed myself in the details coming out - believing there was so much we'd never know about what really happened. I guess I've never talked about my own thoughts and reactions - so thank you for this post and the opportunity to share just a tiny bit of my own experience of that time.

Sending you (((hugs)))) I have been glued to the TV watching documentaries about Diana. I loved her so much. It is so hard to believe it has been 20 years. I'm with Momma Kat, the whole thing makes me angry too. I still find it hard to believe it was an "accident." catchatwithcarenandcody